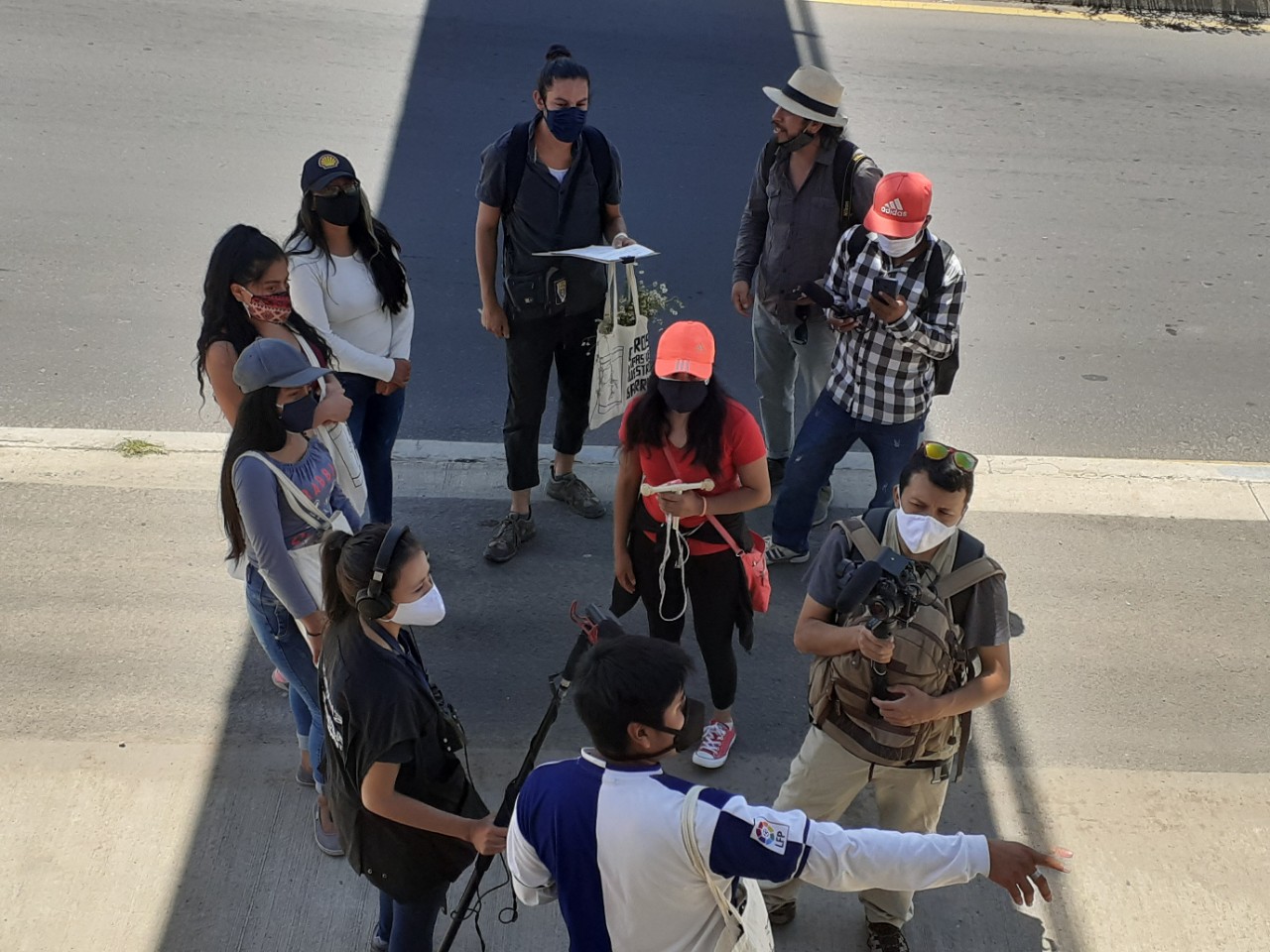 Other Maps of Our Neighborhoods: An experience of social mapping with youth

In 2019, UNDP and UNICEF headquarters called on their country offices to receive innovative proposals for joint work. UNDP and UNICEF in Ecuador presented a project to support youth from vulnerable neighborhoods such as Chillogallo, Calderón and Tola Grande de Tumbaco, to improve resilience in their communities. The proposal, called Laboratory of Dreams, was among the winners and has been adapted to the context of the current crisis. Within this framework, the UNDP´S Acceleration Laboratory has designed different participatory methodologies for discussing the problems and realities.

To begin with, it was convenient to value the term resilience, since it can suggest a “return to normality”, and it may not be the most desirable. One of the many lessons that the health crisis has left us is the possibility of rebuilding better, of designing new and more sustainable ways of life.

With this in mind, Workshop 0 was held. Zero, as it is the starting point without budgets to collectively define, what is our challenge? How to phrase a common, broad challenge that encompasses the singularities of our experiences and our neighborhoods? As a result of this workshop, the youth defined their challenge as, “A lack of social collectivity and leadership that generates inclusion and well-being in our neighborhoods”.

The lack of social fabric as a problem raises new questions, interlocutions and imaginations. They stopped talking about problems such as crime, insecurity, unhealthy conditions, as common places, which although they exist, have been widely publicized and make other underlying problems and causes invisible.

Subsequently, the youth had the opportunity to deepen the analysis through a problem mapping workshop and understand the factors that contribute to their challenge.

After these insights and reflections, youth began the process of producing other maps of their neighborhoods. When we invite you to do this collaborative and gradual exercise, we start by asking ourselves why other maps are necessary. Making maps is used to trace places, knowledge, experiences, relationships. It is an exercise that brings out what is not seen or what we have stopped seeing and encourages dialogue to make connections.

In the first workshops, the youth spoke about the stigma of their neighborhoods for being humble and their marking as infectious sources of COVID-19. Mapping became the opportunity to re-know the territory as a space where relationships, affections, dreams and memories are developed. A non-neutral space that is affected by us and that also affects us. In the words of one participant:

“Making other maps helps to know and worry about every detail that is normally not seen in an already prepared map and what better if a member of the same neighborhood details the places and actions that take place in it.”

This process took several virtual sessions that started with questions such as, “What is a border in our neighborhood? Why is it a border? How to categorize the places in our neighborhood? How do young women live in the neighborhood? Who would they invite to walk together in the neighborhood? In these sessions, the young people, who had previously received a kit with materials, commented, drew, and diagrammed aspects of their neighborhoods. From the identification of ambient sounds captured with their cell phones, to the body-territory mapping to locate how the experiences located in their immediate territories are lived in the body.

These virtual encounters invited them to continue thinking and autonomously mapping the places that were significant to them. These exercises, geolocation, traces, routes, drawings, photographs and reflections were uploaded to digital spaces and shared with the rest.

It wasn’t until we walked together, however, that the connections emerged. The youth prepared a Walk for Jane with the necessary biosecurity measures. We went to the neighborhoods of Calderón, San Luis de Chillogallo and Tola Grande de Tumbaco, to the meeting points suggested by them to walk together, asking questions. Equipped with their planes and handcrafted microphones, they became ethnographers of their own territory, rediscovering people and their relationship with space.

The three neighborhoods lack public spaces conducive to meeting. The sports fields, so versatile in our environment, are in these cases, spaces contested by the leaderships. In one case, half of the pitch has an owner, which means negotiating its use, and young people are at a disadvantage compared to adults linked to the leadership. Locked parks, locked longhouses, open spaces without benches or shade, are places that frustrate encounters. Faced with this, in the best of cases they occupy small pieces of vacant land, sidewalks of a store with a roof, when they have not stopped using public space, especially in the current context of the pandemic.

Faced with the lack of public spaces, private ones arise. Small lots are equipped with luminaires and volleyball nets, charging reasonable prices for their use.

The neighborhoods of Calderón and Tola Grande have gone from being rural to urban parishes in the last 30 years. Their youth tell us about the impact that certain “modernization” infrastructures have on the organization and community life. While the “Ruta Viva” highway is a connecting axis between Quito and the airport, for them it is a border since it divided neighborhoods and communes.

The appearance of housing complexes, which could seem harmless, is also a sign of this urban phenomenon. A young man from Calderón comments on these: “In the end the community organization weakens because they are like bubbles, they only organize themselves within them and do not relate to the rest of the neighbors.” He tells us that his grandfather was the one who managed to install the electric light in his street, that his parents walked 10 minutes to school through chaquiñanes and the forest and now he spends 35 minutes skirting the blocks. “I see that real estate companies sell houses in residential complexes promoting services: water, electricity, telephone, Internet- but they don’t know that my grandfather was the one who fought for that, so it annoys me a bit that they advertise it without knowing how this has been achieved. and now it gives them a surplus”.a aparición de conjuntos habitacionales, que podrían parecer inofensivos, es también una señal de este fenómeno urbanístico. Un joven de Calderón comenta sobre éstos: “Al final la organización comunitaria se debilita porque son como burbujas, solo se organizan dentro de éstos y no se relacionan con el resto de vecinos.” Nos cuenta que su abuelo fue quien logró que se instalara la luz eléctrica en su calle, que sus padres caminaban 10 minutos al colegio por chaquiñanes y bosque y ahora él toma 35 minutos bordeando las manzanas. “Yo veo que las inmobiliarias venden casas en  conjuntos residenciales promocionando los servicios: agua, luz, teléfono, Internet- pero no saben que mi abuelo fue quien luchó por eso, entonces me enoja un poco que lo anuncien sin saber cómo se ha logrado eso y ahora les da plusvalía”.

Some referred to their neighborhoods as “dormitory neighborhoods,” in which adults go out to work in trades in other more central parts of Quito. “Here the first bus at 5 in the morning goes full throttle.” Neighbors who are dedicated to construction, women domestic workers, however, say that the new generations are going to universities with the aim of opting for new trades and professions. The dynamics of the neighborhoods reflect two extremes: the distance and the close. How far away the universities are, the privileged spaces of “culture” in certain areas of Quito, the economic activity far from the neighborhood. And at the same time, they discover that food comes from nearby, that many market stalls are supplied by local gardens and farms in the area, that irrigation water continues to be a connector for neighbors. These other maps are not a static diagnosis of the neighborhoods, but an agora of dialogue and encounter. Maps is not a finished product, but the tool to start and continue conversations. Therefore, if you are a neighbor, an organization with an impact on the territories, we invite you to continue reflecting and producing other maps. You can contact paulina.jimenez@undp.org

DreamLAB invites you to p...

This website uses cookies to improve your experience while you navigate through the website. Out of these, the cookies that are categorized as necessary are stored on your browser as they are essential for the working of basic functionalities of the website. We also use third-party cookies that help us analyze and understand how you use this website. These cookies will be stored in your browser only with your consent. You also have the option to opt-out of these cookies. But opting out of some of these cookies may affect your browsing experience.
SAVE & ACCEPT
X