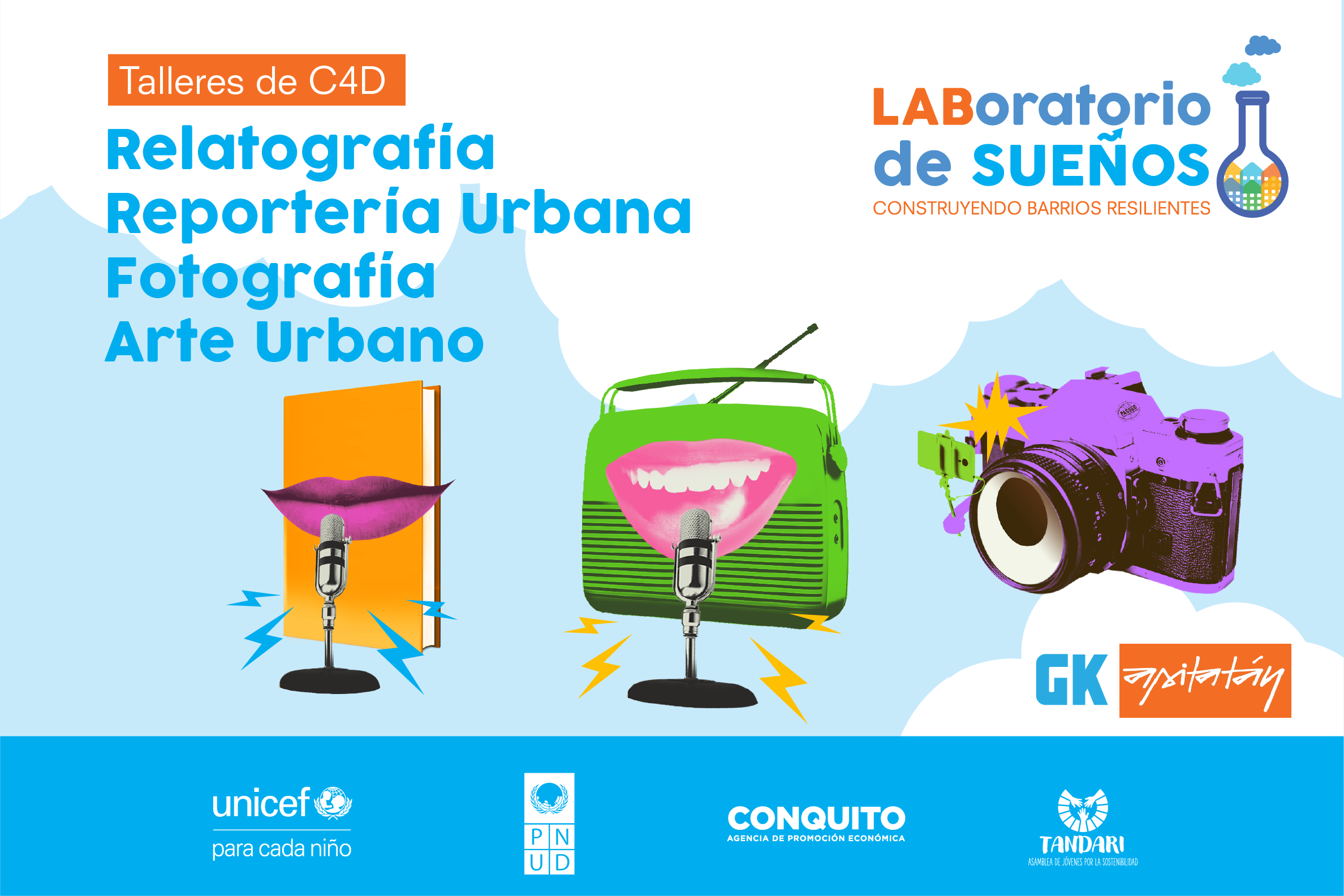 90 adolescents and youth build and express their dreams through communication

Following the guidelines of the UNDP and Unicef, the GK School and the artist Apitatán offer sessions of relatography, urban reporting, photography and urban art.

Adolescents and youth between the ages of 15 and 24 have received workshops and virtual training to identify the problems of their communities, discover their role as agents of change and seek new alternatives to solve them. A path that will lead the group of participants to turn their ideas into viable and sustainable development projects for the construction of safe, resilient and inclusive neighborhoods.

The DreamLAB is an initiative led by the United Nations Children’s Fund (UNICEF) and the United Nations Development Program (UNDP), in partnership with Tandari: Youth Assembly for Sustainability, and implemented through ConQuito. In this first implementation, three parishes in the city of Quito (Ecuador) have been selected: Chillogallo, Calderón and Tumbaco.

With the active and voluntary participation of more than 30 adolescents and youth from the DreamLAB the Communication for Development Workshop began, dictated by GK, an independent media specialized in Human Rights, a gender approach, the environment and transparency. The Workshop is divided into four sessions: Relatography, Urban Reporting, Photography, and Urban Art, which have been identified within the participant´s interests.

Committed to the Sustainable Development Goals for the 2030 agenda, the DreamLAB is committed to quality education to achieve sustainable cities and communities, through the implementation of the C4D Workshop that will serve as a complement for the participants to become the voice of the project, and know how to make their dreams visible through new digital platforms, urban art and traditional media. With participatory, interactive and methodological sessions, the aim is to develop the critical sense of adolescents and young people so that they know how to analyze reality in a comprehensive way, prevent misinformation, discrimination and claim human rights, the dignity of people in the face of the dissemination of content of hate.

The first session of Relatography was held on November 24th, and was dictated by GK´s general editor, José María León. They learned about the importance of telling a story, what its elements are, and the parts that a narrative must have to be memorable. In addition, María Silvia Calvo, communication officer of UNDP Paraguay recounted her experience for more than 30 years in communication with a rights approach. A contrast between theory and professional practice that highlights the preparation, challenges and achievements.

The second session of Urban Reporting was held on Tuesday, December 8th, where the basic practices to become a citizen reporter, preparation and investigation before going out on the field, and effective techniques for recording notes were studied. The third photography session will take place on December 23rd and will be dictated by the photographer and videographer, Diego Ayala. Adolescents and youth will learn about framing, plans, to take photos with their cell phone, taking advantage of natural light and the functionalities of their cellphone.

Finally, the last session of Urban Art will be received in January, dictated by the urban artist and illustrator, Juan Sebastián Aguirre, better known as Apitatán, who will talk about muralism and street art in Latin America, his career and his vision as an artist. He will also do a live demonstration with vinyl and spray, through the creation of a character in a single color.

Several attendees have joined the #DreamLABChallenge,EC, which consists of a series of challenges that they must meet to win the awards: 1) a drone, to do urban reporting from their homes and become aware of the spaces in the sector, and 2) the publication of your final product through the social networks of UNDP Ecuador, UNICEF Ecuador and GK. For each challenge, the participants must apply all the knowledge learned during the three sessions and disseminate it strategically on their social networks, narrating the different problems in their colleagues´ neighborhoods. For the urban art challenge, they must make a sketch where they can capture the transformation of neighborhoods and communities through colors and their own vision.

Melissa Hurtado: “The workshops have been great! They have helped me to express in a better way the messages I want to transmit to my community”.

Sarahí Quiñónez: “There is a big difference between telling a story and knowing how to tell it. The workshops have given me those tools to reach the hearts and minds of people”.

The right to dream

Pollution is also a pandemic

This website uses cookies to improve your experience while you navigate through the website. Out of these, the cookies that are categorized as necessary are stored on your browser as they are essential for the working of basic functionalities of the website. We also use third-party cookies that help us analyze and understand how you use this website. These cookies will be stored in your browser only with your consent. You also have the option to opt-out of these cookies. But opting out of some of these cookies may affect your browsing experience.
SAVE & ACCEPT
X